A live blog (of sorts) for Enterprise MediaWiki Conference (EMWCon) 2016. The conference is also being livestreamed.

Panel – Towards a MediaWiki Foundation 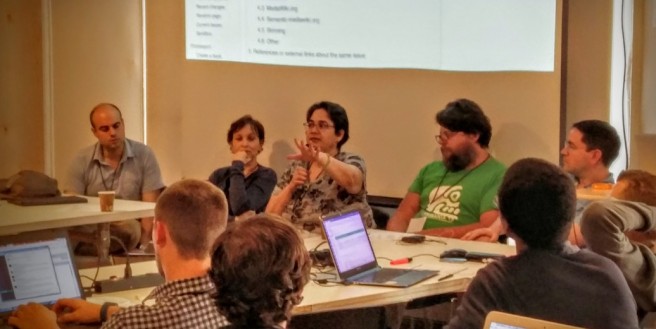 Panel discussion to address some of the challenges around the development, maintenance, and use of MediaWiki and related software (extensions). Not a discussion of separating Wikipedia ops from MediaWiki core (which would be something similar to how WordPress is set up).

Part of the challenge is that the Wikimedia foundation is focused almost exclusively on Wikipedia and their other projects. Desire is to make sure that the MediaWiki software remains usable by other 3d party users, and actually includes development specifically to meet the needs of those 3d party users. For example, the MediaWiki Stakeholders Feature Wishlist.

It is possible to create a template for userpages and have it pushed automatically, need to get user feedback on whether they like this or not. Some people prefer freeform userpage. Balance between user needs / desires and the enterprise’s needs.

All uses existing extensions, doesn’t require any development just “front end” SMW work. Walked through examples the “code” for each. This has potential to cause significant performance issues, will work to have some of this turned into extensions.

Questions about gamification: how do you handle cheating (don’t really), has it helped with adoption (with some people).

Laurent looking at how SMW can be used to help people find answers to their questions.

“Searching doesn’t give you answers, it gives you search results.”

Use the wiki as a wiki; keep it lean and fast. Use APIs to access other systems. Such as WordPress.

Nicolas Nallet talking about the MediaWikiFarm extension. Slides from the talk.

Peter Meyer talking about MediaWiki installations in U.S. Federal Government. Full notes. Something to follow up on – Federal MediaWiki Demonstration and Discussion Group, a monthly gathering to share ideas, practices, and demo ideas. A call for a more consistent coherent wiki policy across the Federal Government.

“Knowledge management is not a curse word.” — Peter Woudsma

Question: how much is common to all wikis in the farm? Many possible options.

Discussion among the group about approaches they have taken.

Lex Sulzer spoke about SMW Factory. Offline, secure, encrypted, backup (and a bunch of other terms). Duplicity, Vagrant, Ansible (executable documentation). Details in the link. An easy way to “clone” a wiki soyou can work on it offline, then push changes back to production. (Meant for dev, not content.)

Ultimate goal – ability to have “offline” wikis that can be updated and merged back in with the main wiki. This would be huge. A project for Friday.

Change 1 – Spreadsheet display. “display = spreadsheet” Each entry becomes a separate instance of  the template on the page. Less work for admins, allows for better HTML, such as <label> (important for accessibility)

Semantic Forms is now its own thing, no longer requires Semantic MediaWiki.

Change 3 – removed some params, some of the long-deprecated parameters.

Thinking of changing the name, to reduce confusion with other “semantic” things.

Important takeaway – cleaning up Semantic Forms to make it better, easier for developers and admins.

Also discussed changes to Cargo (an alternative to SMW). Key feature of note (to me) – text search of articles.

Peter Woudsma gave a quick overview of the history of MediaWiki in the enterprise and some of the challenges of taking a tool designed as an easy way to update content and making it useful and valuable at the enterprise level. A nice summary of Enterprise aspects of previous conferences, and the need for balance in discussing the non-technical aspects along with the technical.

He gave us quite a few questions, homework if you will, to consider as the conference progresses. Not just in how we use the tools, but how we influence the future development of the tools, and the support infrastructure.

Good discussion around the philosophy and implementation. Differences between what’s going on with MediaWiki software and WikiMedia. Need to show off who is using MediaWiki, and how they are using it. WikiReport.

Lex – SMW power user is critical to success. SMW is a digital co-worker.

Mix of corporate, government, and non-profit interests represented. People from several places in US and Europe (France, Germany, Switzerland).